I hate to act like the reoccurring – pop-up out the blue after four months EX playing with your emotions like that but I guess I am hitting you with the “hey, miss you” post.

I’ll keep it short on the life update: I’m still good. Can’t believe Summer is coming to an end. But as someone who once struggled with transitions, I actually embrace the changing of seasons.  Even though I didn’t post that much this Summer, I continued with my usual  stuff – buying hair and skin products that look cool, practicing my new creative outlet – photography, mentoring some kids and trying to maintain balance.

Speaking of balance – balance is brunch as far as this post goes. Especially since I call myself being on a budget for the last three months [ hey, listen. I had to.]

Sooooo that sadly means I had to carefully think about where I spent my money.

So where did I go? Due South with one of my good friends.

Bottomline verdict: Due. South. Is. The. Bomb. Dot. Nothin. But. Net. Ohhkkkaayy.

And I’m not going to lie, when she asked me to choose the place – I really only wanted to go to Due South for the Frose′. But then I saw the mimosa pitcher passing by as I walked in and what’s brunch without OJ and Champagne? Level up. Bottomless.

What we ordered: My friend, the Shrimp and Grits w/ a fried egg. Me, the hot fried chicken biscuit. [hot sauce on the side]. Trying to be classy.

Pleasant surprise: The Butter and Jam biscuit basket! Listen. Here. [Order. It. And TRY to share it.] You will not.

The Mimosa Service: Probably the best I’ve ever had. I’m usually 50/50 with mimosas. I either want them or I don’t – depends on my mood but the mimosas were well made and smooth. And the refill game here is strong. I felt like a lushy but hey – life is short.  Po’ Up.

I also caught their happy hour – I’ll post that under my Masterdates.

Until next time, eat good food.

PS – I don’t think I have a good picture of my fried chicken biscuit. * Face palm emoji* 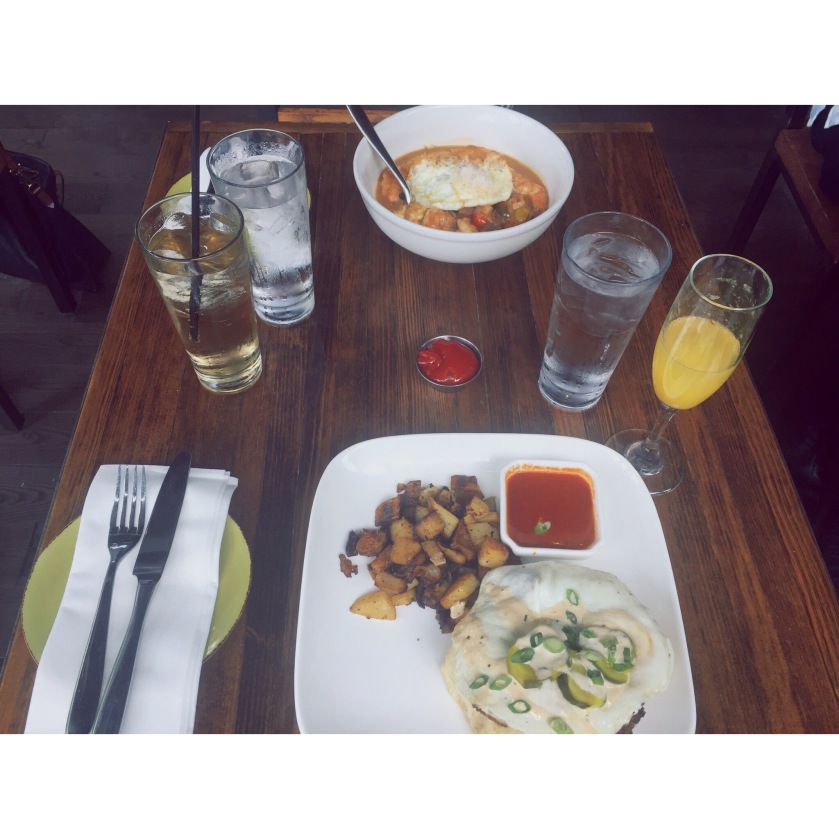 This site uses Akismet to reduce spam. Learn how your comment data is processed.

There was an error retrieving images from Instagram. An attempt will be remade in a few minutes.

Hi! My name is Cheryl but my friends call me Bloom. I'm a 34 year old true millennial who decided to start a blog about becoming an adult, a woman, foodie and dating. I love self help books, oldies music and talking to older people about life. I like to laugh, tell jokes, and buy"sh!t online" as my dad says that I usually don't need but hey what girl doesn't?! Right? Thanks for stopping by. Come back any time.

What I Just Read